The Campaign of Cestius Gallus

and the Defeat of the Twelfth Legion

"Fear we had in no small measure, when we saw the populace in arms, and we were at an impasse as to what to do, having no power to stop the revolutionaries.

Being in clear and present danger, we claimed to share their convictions. We did so hoping it would not be long before Cestius would come up with a great force to stop the revolution.

But, coming and engaging in battle, he was defeated, and a great many of those that were with him fell.

This failure of Cestius was a calamity for our whole nation; for those who loved war were so excited by it that they had hopes in the end of conquering the Romans."

During the revolt in Jerusalem, the rebels had defeated the pro-Roman civic leaders, the local Roman garrison, and the forces of King Agrippa. Now the report of the loss went up the chain of command to the Governor of the Roman province of Syria, Cestius Gallus, upon whom fell the responsibility to smother the rebellion.

Cestius Gallus had visited Jerusalem at Passover the previous year and heard the people's denunciation of the Judean procurator Florus. (War 2.14.3 280)  Cestius had promised to curtail Florus' misdeeds, and Florus was appropriately contrite while in the presence of his superior. But Cestius spent most of his time far away in Antioch -- a 300 miles (500 km) distance, a journey of some two weeks. In July of 66 CE, after violent clashes between the people and Florus' troops, Cestius received another complaint from the Jerusalem leaders and a simultaneous counter-complaint by Florus against the Judaeans. Although Cestius' advisers recommended he lead an army to Jerusalem to settle the dispute one way or the other, Cestius himself decided to gather more information by sending an emissary (War 2.16.1 333-335) -- thus showing the personality traits of reasonableness and slowness to take action that would prove disastrous in his subsequent campaign.

Cestius' emissary, Neapolitanus, was treated with great respect by the Jerusalem leaders and given a full account of the recent actions, including a tour of the significant sites. While waiting for Neapolitanus to make his report to Cestius and for the Governor to respond, however, King Agrippa made a disastrous attempt to persuade the people to abstain from complaining to the Emperor and to continue to submit to Florus, which resulted in the outbreak of open revolt. (Described in War Chronology 1). In late September Agrippa personally journeyed to Antioch to discuss his defeat with Cestius. (War 2.  481)

Thus Cestius became forced to lead an army against Judaea. But he was a civil administrator, with no battlefield experience historians are aware of; apparently Nero had only recently appointed him commander of the legions in Syria, succeeding the general Corbulo. His inexperience showed in a number of mistakes he made in the attack on Judaea that led to the destruction of the Twelfth Legion.

An important analysis of Cestius' campaign was made by Mordechai Gichon. Although Cestius began his campaign in classic Roman style, observes Gichon, including the terrorizing of the populace and wholesale destruction of crops and buildings to undermine the enemy's ability to wage war, he erred several times:

To the Jews, the defeat of an entire Roman Legion, augmented with auxiliary troops, seemed like a miracle. There can be hardly any doubt that the false prophets that cooperated with the revolutionaries saw the hand of Heaven in the sudden and inexplicable retreat of Cestius, who had seemed on the verge of taking the city. Biblical precedents must have been cited, such as the sudden withdrawal of Sennacherib in the time of Hezekiah:

The withdrawal must also have recalled the miraculous success of the Maccabees against a previous "ruler" of Syria, because the pass at Beth-Horon was the very site of Judah Maccabee's defeat of the army of Syria:

When [Seron, leading the Syrian army] approached the ascent of Beth-Horon, Judah went out to meet him with a small company. But seeing the army coming to meet them, they said to Judah, "How can we, few as we are, fight against so great and so strong a multitude? And we are faint, for we have eaten nothing today."
Judah replied, "It is easy for many to be hemmed in by few, for in the sight of Heaven there is no difference between saving by many or by few. It is not on the size of the army that victory depends, but strength comes from Heaven. They come against us in great insolence and lawlessness to destroy us and our wives and our children, and to rob us; but we fight for our lives and our laws. He Himself will crush them before us; as for you, do not be afraid of them."
When he finished speaking, he rushed suddenly against Seron and his army, and they were crushed before him. They pursued them down the descent of Beth-Horon to the plain.
(1 Maccabees 3:16-23).

The choice of Beth-Horon as the place to confront Cestius was surely guided by the knowledge of that earlier Heaven-sent victory. Cestius would have been seen as Seron, and doubtless many different Judaean commanders saw themselves as the next Judah Maccabee.

Joshua himself pursued the five kings of the Amorites through the pass at Beth-Horon, where the Israelites received Heavenly assistance:


As they fled before Israel, while they were going down the slope of Beth-Horon, the Lord threw down huge stones from heaven on them as far as Azekah, and they died...
On the day when the Lord gave the Amorites over to the Israelites, Joshua spoke to the Lord; and he said in the sight of Israel,
"Sun, stand still at Gibeon,
and Moon, in the valley of Aijalon."
And the sun stood still, and the moon stopped, until the nation took vengeance on their enemies.
(Joshua 10:10-13)

Thus Beth-Horon was the sight of some of the most famous and miraculous victories in Jewish history. So it is not surprising when Josephus tells us how elated the rebels were at this, proof  that Heaven was indeed with them -- proof so compelling that the pro-Roman faction was completely silenced: "Distinguished Jews abandoned the city like swimmers from a sinking ship", says Josephus (War 2.20.1 556). And moderates throughout Judaea were swayed to the cause -- including, it appears, Josephus himself.

Roman Historians on the Defeat of Cestius Gallus

The dismaying Roman defeat was recorded by the two major Roman historians of the era, Tacitus and Suetonius, who wrote in the generation after Josephus, at least 30 years after the war:

the rebellious Jewsmurdered their Governor, routed the Governor of Syria when he came down to restore order, and captured an Eagle.
Suetonius, The Twelve Caesars, Vespasian 4 (Penguin, trans. Robert Graves)

the endurance of the Jews lasted till Gessius Florus was procurator. In his time the war broke out. Cestius Gallus, legate of Syria, who attempted to crush it, had to fight several battles, generally with ill-success. Cestius dying, either in the course of nature, or from vexation
Tacitus, The Histories V

Martin Goodman, The Ruling Class of Judaea, Chapter 7: "The Outbreak of Revolt" 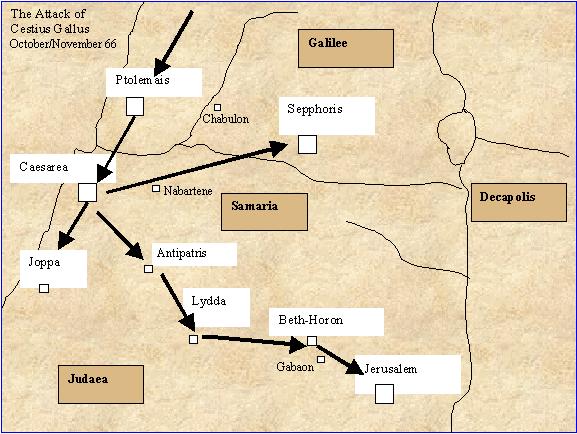 Hebrew dates in square brackets are estimates by M. Gichon based on Josephus' information, military procedure and distance, with an estimate of Roman troops average 25 km per day. Otherwise the dates are those given by Josephus or easily inferred (Hebrew month names are used here). Modern calendar equivalents are those of B. Niese, as given in the Loeb editions; the year is 66 CE (AD) throughout. All references are to Josephus' Jewish War.