Books and Articles on Josephus

The books mentioned elsewhere on the Flavius Josephus web site are listed here, together with many other useful works. To find a specific author or title, use the Find function on your web browser menu to find that word on this page.
I include here reviews or summaries of some of the works; I will add more over time.
The scholarly literature on Josephus is massive. The best bibliography on the whole of these works is Louis Feldman's Josephus and Modern Scholarship. Unfortunately it is expensive, but if you can find a copy in the library you will be well rewarded.
- G. J. Goldberg
Flavius Josephus Home Page

Many of these can be found in your local public or university library.
You can also purchase many of these books now from Amazon.com. Click on the
order link next to the book title to go to Amazon's  page for the book.

Editions of the Complete Works of Josephus

The Works of Josephus

William Whiston, professor of mathematics at Cambridge, published his translation of all of Josephus' works in 1737. It proved to be very popular, supplanting  previous English translations by Thomas Lodge and Roger L'Estrange. There have been many editions of Whiston over the past 260 years.

While Whiston's  is the only single-volume translation widely available, its now-antiquated English can be unpleasant for modern readers. (See my note on the translations on this web site.) Moreover, it is based on Greek manuscripts that are now not considered the best. For those seeking a better (and much more expensive) translation, see the Loeb Edition.  A new translation is being prepared by the Josephus Project.

I recommend the Hendrickson edition of Josephus.. It has been re-typeset into a clearer font than previous editions, and best of all it includes the section-by-section numbering system which has been available only in the more expensive Loeb editions. With this numbering system one can easily find and refer to particular sentences, rather than whole chapters. It has a good index which unfortunately is marred by typographical errors in the reference numbers, often getting the chapter and paragraph correct but identifying the wrong book.

There is also a hardcover edition:

The Kregel edition, whose cover is shown here, has been the standard for the past twenty years. Some may prefer the denser text of these pages than that of the Hendrickson.

There are new editions from Thomas Nelson, Inc.

Paperback (January 1999)
Not Yet Available

And there is now a version on CD-ROM:

The multi-volume Loeb edition contains the complete text of Josephus' works in the original Greek with an English translation on facing, with copious footnotes. It is the standard edition in English for scholarly study of Josephus. The last volume of the Antiquities, Book XX, has an excellent index. For more information, see the  Loeb Classical Library web site.
Warning! The purchaser should be careful to note the contents of each volume purchased,, in that the books of Josephus have been divided differently among the volumes  over the years. At one time there were nine volumes, but in the latest printing there are thirteen.

The 1998 printings of the Jewish Antiquities are divided as follows:

A lively  translation and modest condensation of the Jewish War makes the Penguin Classics edition an excellent introduction to Josephus. I recommend it.

Steve Mason's introduction to the relation between Josephus and the New Testament has become the standard work on the subject. It covers the intersection of the environments of Josephus and the gospel writers, New Testament figures in Josephus, and original research by Mason on the relation between the speeches in Acts and the speeches reported in the Jewish War.

These two collections edited by Feldman and Hata provide a wide array of articles focused on aspects of Josephus. A very stimulating set and a great bargain.

The first comprehensive commentary on the works of Josephus. Volumes will appear over the course of several years starting in 2000. For more information see www.brill.nl  or editor Steven Mason's Brill Josephus Project page.

Flavius Josephus between Jerusalem and Rome : his life, his
works and their importance
by Per Bilde
Sheffield Academic Press (1988), ISBN: 1850750602

This overview of Josephus analyzes his works in new ways and also serves as a review of modern scholarship on Josephus. A highlight of the book is the study of changing fashions in the scholarly and popular opinion of Josephus' character. Concerning this, Bilde introduces the concept of the "classical conception of Josephus," flourishing the greatest in the late 19th and early 20th centuries, which pictured Josephus as weak in character and incapable as a historian; and against this Bilde identifies the "modern conception of Josephus" which views him as a skilled author sincere in his descriptions of himself and his times. Also discussed is evidence for Josephus' reliability as a historian and how his works can be used in a variety of disciplines.

This study of Josephus' life and environment has become one of the standard studies of Josephus. It covers Josephus as a writer in Greek and Aramaic and his participation in and interpretation of  revolution and civil war in Judea and Galilee.

A collection of essays considering the influence of the city of Rome on Josephus's writing, and of Josephus' effect on his Roman contemporaries.  The essays are gathered into three broad topics: "Josephus in the social and political context of Flavian Rome",  "The impact of the Jewish war in Flavian Rome", and "Josephus: Literature and historiography in Flavian Rome." 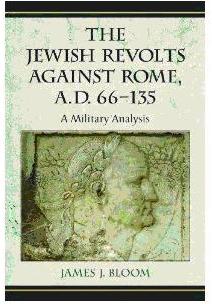 The Jewish Revolts against Rome, A.D. 66-135:
A Military Analysis
by James. J. Bloom
Published by McFarland (June 17, 2010)
ISBN: 978-0786444793
This analytical history focuses objectively on the military aspects of all three Judean uprisings. The events leading up to each rebellion are detailed, while the nine appendices cover such topics as the nature and number of the Jewish rebels and the factual reliability of the controversial Josephus.

An introduction to Josephus and his works for the French-speaking public. In Denis Lamour's words, "After a biographic summary, I attempt to explain Josephus' view of history and the importance of his works in Jewish historiography. I argue that Josephus' big mistake is to have written his Life."  It can be ordered at  http://www.alapage.com.

Flavius Josephus, the Zealots and Yavne : Towards a Rereading of
the War of the Jews
by Monette Bohrmann
Paperback (June 1994)
Peter Lang Publishing; ISBN: 3906752100
Order

The Image of the Jew in Flavius Josephus' Paraphrase of the Bible, by Paul Spilsbury(Mohr Siebeck, Texts and Studies in Ancient Judaism No. 69, 1998)

Josephus and Faith: Pistis and  Pisteuein as Faith Terminology in the Writings of Flavius Josephus and in   the New Testament, by Dennis R   Lindsay. (Brill, 1993).

The Herodian Dynasty: Origins, Role in Society and Eclipse, by Dr. Nikos Kokkinos.  ( (Sheffield, England : Sheffield Academic Press, 1998).
Josephus is the primary source for our knowledge of the Herod family. This book  heavily analyzes Josephus as it examines the origins of the Herod family, measures its impact on Jewish society, and discusses the influence it exerted beyond Judaea. It argues that the Herodian dynasty played a central part in the workings of the Eastern Roman Empire. For more description, see The Kokkinos Archaeological Home Page.

The Ruling Class of Judaea: The origins of the Jewish Revolt against Rome A.D. 66-70, by Martin Goodman.
An examination of the cause of the War with emphasis on the power elite and why they could not keep the peace. Very closely examines everything Josephus mentions  -- and deliberately fails to mention -- about the Judean aristocracy.

El profeta y el traidor
by Gustavo R. Giorgi
(Ediciones PROA of Buenos Aires, www.edicionesproa.com, 1999)
A novel based on the life of Josephus, told in first person from Josephus' point of view.

Lion Feuchtwanger and his Josephus Trilogy
A review and introduction by Jim Bloom
The neglected German-Jewish author Lion Feuchtwanger is one of the most stalwart defenders of Josephus’ blighted reputation. Feuchtwanger’s fiction trilogy, approximately based on Josephus’ discernible life history, is considered by many Josephan scholars to be in the forefront of the modern tendency towards moderation of the latter’s conventional traitor image. This article discusses Feuchtwanger's work and describes the re-discovery of Feuchtwanger's stage play about Josephus.

Josephus's Interpretation of the Bible
by  Louis H. Feldman

"Remember Amalek!": Vengeance, Zealotry, and Group Destruction in the Bible, According to Philo, Pseudo-Philo, and Josephus Louis H. Feldman